Get a chance to meet 12AM, an artist on the rise that has made his way from Toronto into the mix of the Los Angeles music scene. Now signed with Sony Music, the future looks incredibly bright and 12AM’s repertoire is only at its inception. Prolific in his dexterity, 12AM is consistently writing for other artists as well as himself.

He can be seen frequently working with Elijah Woods and Omer Fedi, known for The Kid LAROI “Without You,”  24kGoldn & Iann Dior “Mood,” and Lil Nas X “Montero,” also his collaboration with TheHxliday on “Voices.” Touring accolades include shows with Internet Money, Iann Dior, 24kGoldn, and Trevor Daniel. All while praise has rolled in from industry key players such as Complex, Elevator Mag, idolator, Lyrical Lemonade, and Vice’s Noisey. 12AM also appears on Spotify’s ‘New Music Friday’ and ‘tear drop’ playlists, as well as Post Malone’s ‘posty’s playlist’.

With an already collection of hits, which include songs like “Voices”, “Come Over”, and “Drugs,” 12AM has now released his latest, “Showgirls” featuring top Toronto rapper Pressa and rap sensation Tyla Yaweh, who has been known for working with Post Malone, Da Baby, Gunna, Wiz Khalifa, and Trippie Redd. 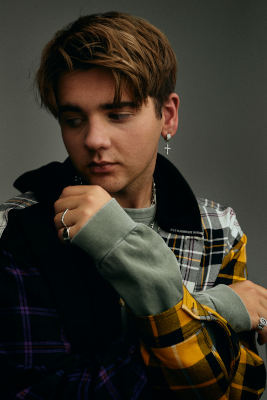 Today 12AM reveals the official video directed by Logan Meis, who has been known for working with Trippie Redd, The Kid Laroi, and Polo G. It’s a high contrast, moody, and cinematic experience in itself. “Showgirls” peeks into a late night burlesque show gone awry. The night manifests into a master scheme of kidnapping, robbery, and murder.

While corrupt wealthy men put their guard down for some debauchery, they’re clipped of their wallets and prized possessions. The lights go off and the show concludes, leaving the club patrons in the dust. In the end, 12AM (aka the club owner) and the showgirls meet Tyla and Pressa (12AM and the showgirls’ partners in crime) at the hideout.

The single follows the success of “come over,” the lead track from 12AM’s latest After Midnight EP that has amassed over 5 million streams. While After Midnight served as a redefinition of 12AM’s sound, “Showgirls” takes 12AM back to his Toronto roots incorporating melodic R&B that is distinct to the 6. Additionally, with 12AM boasting over 26 million streams on Spotify alone, plus Tyla and Pressa’s combined 5.5 million monthly listeners on the platform, “Showgirls” is set to become an instant hit and reach an array of hip-hop, pop, and R&B lovers.

Meet and Get to Know 12AM

Kulture Vulturez: What initially motivated you to begin a career in music?

12AM: Ever since I was a kid I always wanted to do this. I remember writing my first song when I was about 6 years old. I grew up listening to hip-hop, that Eminem, 50 Cent, Dr. Dre era really was it for me.

My mom got me into Motown, like Steve Wonder, Jackson 5, etc. and I loved that too so that’s where the R&B side of me comes from. Then when my mom passed, I kind of just went for it. I moved to L.A. and really put all my effort into this shit. She always wanted me to pursue my dreams so I felt like I finally could once she was gone.

Kulture Vulturez: Did your struggles in Canada with heartbreaks and feeling isolated prepared you for the ups and downs of being an artist?

12AM: I mean when my mom passed it really took that safety blanket away from me. I was struggling with homelessness and just flew to LA with my savings. I think the struggles of being an artist are a lot easier for me to deal with because I’ve been through so much worse.

People hating or doubting you is a cakewalk compared to taking care of someone with cancer for 6 years or experiencing homelessness. I’m lucky to even be alive, so this music stuff is easy to deal with.

Kulture Vulturez: Do you feel like with everything you been through, your music can positively affect and impact listeners?

12AM: Yeah, 100%. I think so many people can relate to what I write. When you’re going through something in your life, you just want to feel heard and feel like someone else has been there as well. It helps to not feel so alone. I have a real connection to my fans and we have stuff in common.

Pain is beautiful and I’m glad I can help pull people up. I’ve gotten so many messages from fans that tell me that I’ve helped them through struggles with depression. It’s inspiring and I’m glad my music resonates with so many individuals.

Kulture Vulturez: What’s the special meaning behind the name 12AM?

12AM: 12AM is just the hour, the time of night where you feel everything. The good, the bad, the sexy, virtues, vices. Midnight is like a turning point. It’s a new day but also the darkest part of the night. “It’s always darkest before the dawn…”

Kulture Vulturez: What’s your typical thought or creative process when making a song?

12AM: My friends and producers send me beats and I will usually scan through them to see what I vibe with. Dark, 80s inspired stuff lately, sometimes I write three songs in a day. But I can also go a month without writing anything. I need to take that time to recharge. Sometimes, I feel super inspired and it just kind of hits me, feels like a gift the universe is giving me. Things just pop into my head and feel right, it’s hard to explain.

Kulture Vulturez: How has the transition from Canada and moving to LA been for you and your career?

12AM: Moving to LA was great for me. I miss Canada most of the time because there’s so many people I love there. But I have really built my life in LA in the last couple of years I’ve been here. I have a girlfriend and a dog and it just feels like where I need to be right now. Actually, I hate LA if I’m being honest. I want to go somewhere and just live in a small town away from all the people.

Kulture Vulturez: Breakdown your latest song “Showgirls”? What gave you the idea and what is the basis of the song?

12AM: Honestly, I was kicking it with Tyla so much, that dude just rages every night! So this song came from the partying and places we’d go to. We made it in one night at like 4AM and everybody at the crib was going crazy.

Kulture Vulturez: What’s next from you that you’re able to share and we should be on the lookout?

12AM: New album, new music, tour merch literally everything! I’m free from my last deal and I’m with Sony Music now, so everything just feels so different. I’m finally able to release the music I’ve wanted to for so long and it’s finally getting the attention I’ve been waiting for.