Brodie B has made it look easy to be considered a jack of all trades from designing and creating his own clothing line to being a hip hop artist in front of the camera to dealing with just about every aspect of the rap game that is behind the camera, all while representing the self made brand of SOUR LIFE.

What does SOUR LIFE stand for?

Surviving Our Urban Realities Living In Foul Environments.  SOUR LIFE, we’ve been moving since 2012, but even before that we were Open Box Entertainment.

What was it like growing up in your hometown?

Farrell, it’s a small town, but everybody here has a lot of loyalty for the city, we’re proud to be from here.  A lot of people from athletics came from here, just a lot things transform from here. We are real fashionable and try to get real fly, things you don’t see in other small towns.

Kind of get an Atlanta and New York influence.  We’re influence by the South, but we’re also influenced by the East, I guess because we are right there on I-80.  So, if you going to Chicago or coming from New York, if you stop right off the exit it is going to bring you right here.  That makes for the flavor, because it is all type of people here.

Walk through his old block on Market Ave. 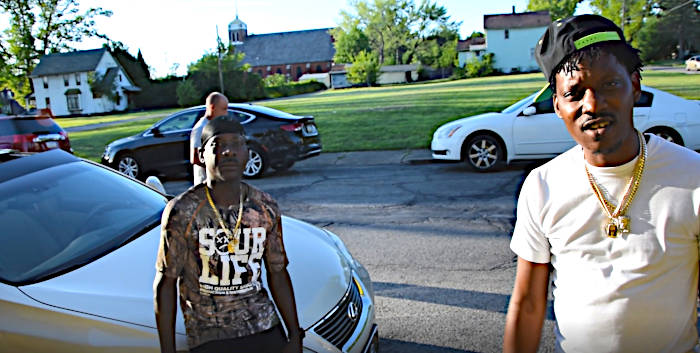 Posted in the heart of Farrell. “We here right now in the middle of the hood and this is where I’m from, Farrell, PA”.

You have a clothing line, you rap, what are some of the other things you do?

I do everything.  In the studio I do the engineering, I do the beats, I do the videos, I have the clothes, I mean that’s what it is.  I’ve always been a creative type of dude.  When everybody was running around playing sports and shit, I was in the crib drawing.  I was at art festivals and art contests, that’s just the type of shit I do.

Back in the day I use to win all type of art contests, so I just basically advanced with it and kept with it.  And now I do all type of shit, sometimes I amazed myself with the shit I be doing.  This is what I do, I’ve been creative like this ever since I was young.  I was in kindergarten and won a contest, a statewide contest, and had a chance to meet the governor. So, that just goes to show how far back I’ve been doing it.

What is next for you?

Now, I really just want to start me a label.  We a label now, but get it out nationwide and worldwide.  Find me some artists and really promote them and get them to achieve their goals.  I kind of eased down on all the rapping and mostly doing the other side of the camera shit.  The engineering, the graphics, the videos, coming up with how we are going to promote this, how we are going to go on tour with it, I’m doing everything behind the camera.

Full Interview/Mini Doc. of Brodie B and SOUR LIFE