Cincinnati Hoods to Hoods: Full Tour of the Cincinnati Ghetto

Short Story and Breakdown of the Cincinnati Hood

While the “Nasty Nati” may not be the perfect moniker for the Cincinnati ghetto, a community located in one of the largest Midwest cities bordering Kentucky in southern Ohio, there is another side to Cincinnati’s urban community.

From the Downtown section of Liberty and Linn and Over-The-Rhine to the West Side along Harrison or Beekman  to the Cincinnati hoods around Reading Road to various areas of the North Side the untold story of the Cincinnati ghetto expands throughout the city.

The heart of the two areas expands along Liberty Street from Interstate 75 to Reading Road as Liberty connects the two major neighborhoods of the West End and Over-The-Rhine.

Small public housing complexes like Lincoln Courts and Park Town or single-family homes and apartment buildings in areas known as Tot Lot and Helltown accounts for the makeup of the Downtown neighborhoods.

One of the largest housing complex within the area of Linn Street.

Long before the Downtown’s reputation, Cincinnati’s black population began around the intersection of Liberty and Linn, an area officially known as the West End, as freed and runaway slaves from southern communities of nearby states like Kentucky or Virginia relocated into the Queen City.

During the 1800s, surprisingly, the city of Cincinnati had one of the country’s largest concentration of African-Americans as the West End area grew into becoming a stronghold for many of black families as thousands of people lived in the community.

Despite the thought of escaping the racist and often discriminating south, blacks in Cincinnati’s early days faced harsh laws, segregation, and an environment that was quite similar of the southern communities many escaped from.

By the 1930s, sections of the community was destroyed replaced with the public housing units of the former Laurel Homes, both for white and black families as one of the country’s first integrated communities.

The Laurel Homes, which were south of Liberty Street around Linn Street, were demolished and rebuilt during the 2000s with majority of today’s rebuilt gentrified community being finished by 2007.

With the destruction and slum clearance of the West End neighborhood, many black residents were forced to relocate into the nearby neighborhoods of Mt Auburn, Walnut Hills, Avondale, Evanston and Corryville, from the 1930s to the 1950s. 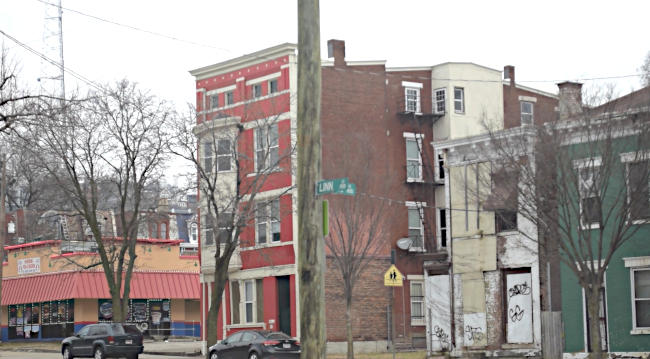 While West End was one of the city’s original black communities, the neighboring Over The Rhine neighborhood, which sits east of Central Parkway, did not gain a black population until the 1960s after sections of the West End were destroyed through urban renewal.

A former German immigrant community, Over The Rhine declined after the community was left unattended and many of the former residents failed the need to upkeep the neighborhood, which was right before African-Americans entered the area.

For decades this area has been publicized in the light of negativity, from indictments and mass arrests of the Tot Lot area (around Linn and Findlay) to the constant media attention for the community’s street activities of shootings and other crime in the Cincinnati ghetto. 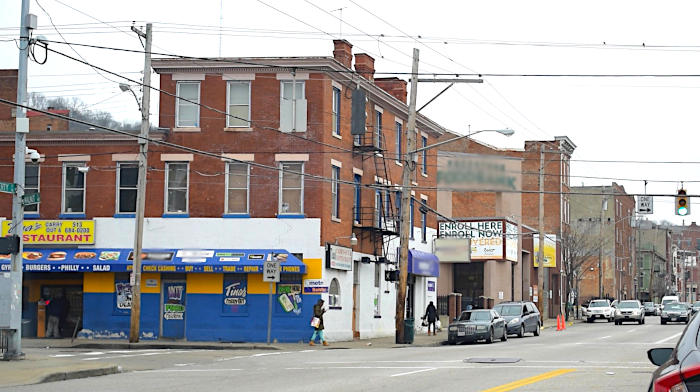 One of Ohio’s most active communities is on a verge of changing as gentrification is making its way into the community with the demolishing of the former Tot Lot park, the transformation of the neighborhood once around Washington Park, the former Laurel Homes being rebuilt into a smaller development are all just a few examples.

The community is slowly becoming a memory to many of the former residents, whether they stayed on McMicken, Vine Street or anywhere in the Downtown section, as the writing is on the wall that in a few years this area will no longer be part of the Cincinnati’s urban community.

Before the movement into neighborhoods like Avondale, Corryville or Mount Auburn, European immigrants created homes in these communities, but their exit into the suburbs helped each area grow and expand into the city’s black community.

For Cincinnati’s black population, the establishment of Walnut Hills begun around today’s intersection of Gilbert and Martin Luther King Drive and would later expand into other sections of the neighborhood as white flight left a vacancy and opportunity for African Americans to reside in the neighborhood. 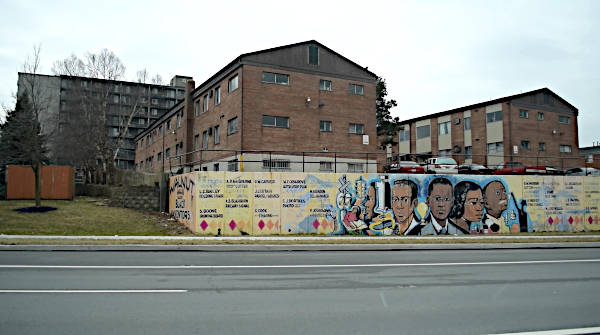 Mural in the Walnut Hills neighborhood.

Following Walnut Hills, other neighboring neighborhoods were followed with an increase of a black presence by the 1950s as large portions of Cincinnati’s original black community of the West End was demolished and replaced by the Laurel Homes housing project.

Mount Auburn, which was once a very wealthy community as one driving through the neighborhood can witness large homes that were once occupied by the city’s elite, changed after the destruction of the West End’s black community and many relocated into Mt. Auburn.

At first, slum clearance of the 1930s led the movement of replacing the West End with the Laurel Homes and forcing a relocation for hundreds of black families, but the construction of Interstate’s 71 and 75 destroyed major sections of many neighborhoods, while furthering the decline of Cincinnati’s black and urban neighborhoods.

One of the most known Cincinnati hoods is Avondale.  A large community that is equipped with apartment buildings, small housing complexes, and single family homes, while also being divided in some sections between the lower income of the Cincinnati ghetto and Cincinnati’s middle class, which can be seen in parts of North Avondale.

One of the many small apartment complexes within the large neighborhood of Avondale.

As many of the East Side neighborhoods were declining during the 1970s, the urban population expanded further along Reading Road into the sections of Bond Hill and Roselawn.

A common theme, the East Side, especially in places like Evanston and Walnut Hills, is experiencing a population and demographic change as these once so-called Cincinnati ghetto areas are some of the most sought after communities in the city by developers.

Just on the other side of town is Cincinnati’s West Side, an area that consists of communities like Cumminsville and Beekman Street, the Fay Apartments, the old English Woods housing projects, the Mac (McHenry Avenue) and Harrison Avenue of Westwood, and Price Hill.

On the West Side the urban and African American community began in the neighborhood of Cumminsville as the community is one of the city’s first predominantly black neighborhoods, dating back to the early 1900s. 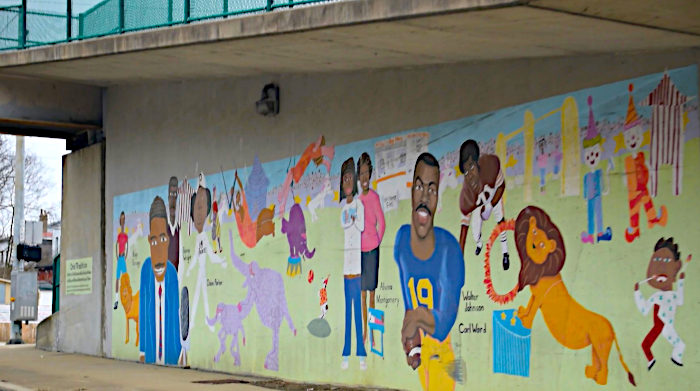 Mural in the Cumminsville neighborhood highlighting all the famous African Americans that once resided in the community.

With the same old story as most cities, Cumminsville was a successful community until the urban renewal construction of Interstate 74, followed by construction of the two housing complexes of Millvale and Moosewood, destroyed many of the homes and businesses and displaced majority of the residents.

Today, the Beekman Street area is only made up of a few residential streets and the housing complexes of Millvale and Moosewood of the Cincinnati ghetto.  Known locally as Lava World, these two housing complexes are both in the current process of either being demolished or renovated. 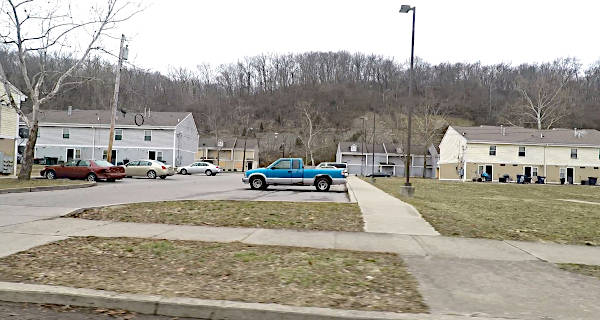 Nicknamed E-Dub was a large public housing complex of over 700 units that was constructed in the 1940s and became known as English Woods.  Demolished during the late 2000s, this large complex was the heart of the West Side until the community met its demise.

Just south of the former location of English Woods is the North Fairmount community, or just Fairmount for short.  A very isolated and somewhat an impoverished Cincinnati ghetto area that is centered around Baltimore and Carll streets, right off Beekman Street.  This area has for long been an ignored community by the city and is often hidden from the rest of Cincinnati. 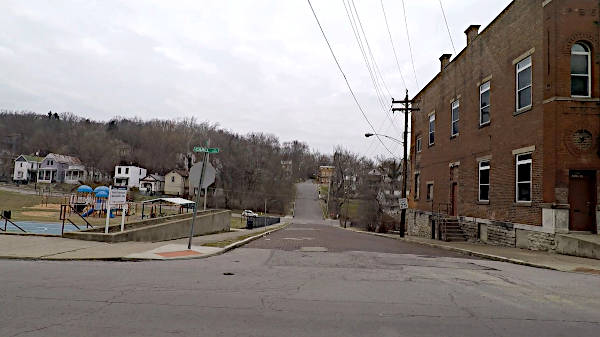 Fairmount may not have been a thriving community at one point, but the neighborhood, which is currently mostly vacant, was much more vibrant as late as the 1960s than in the area’s recent years with much of the original housing being demolished or just vacant and rotting away.

The largest West Side neighborhood is Westwood, a community of homes and apartment buildings that is mainly based around Queen City, Harrison Avenue and McHenry Avenue, along with one of Cincinnati’s most notorious neighborhoods, the Fay, which was recently renovated into the Roll Hill apartments. 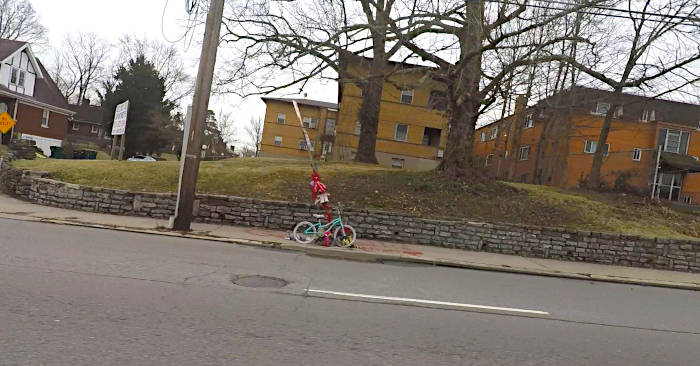 Currently, the Westwood neighborhood is experiencing a trend of a rise in home and property values as gentrification is slowly creeping into certain parts of the urban communities of Westwood and some of the other West Side neighborhoods that lie in the heart of the Cincinnati ghetto.

Other than Lincoln Heights, which is not officially part of the city of Cincinnati, not until the 1960s and 1970s did the city’s black population began to make its way into the North Side communities.

As elsewhere, just about all of the North Side neighborhoods were originally home to white families with exceptions to places like Winton Terrace and College Hill, around Lantana and Cedar Avenue, that changed by the 1970s.

Eventually, areas like Mt. Airy, Mt. Healty, FinneyTown, and as far north as Forest Park became home to a large portion of the city’s black population as the area is currently continuing to grow and expand. 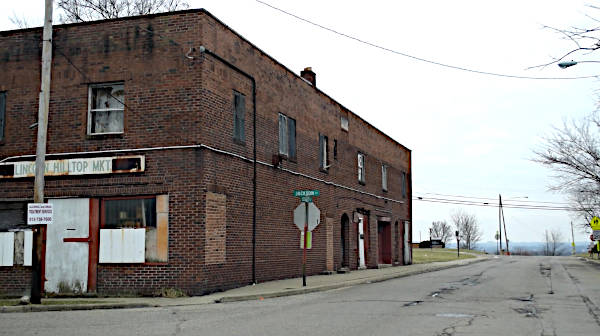 An old building in the historic black community of Lincoln Heights.

The black community came into the North Side during the 1970s, but along Wyoming Avenue in the Lockland neighborhood an African American community has been in the region since the early 1900s.

What began as a small community in Lockland relocated into the Lincoln Heights neighborhood during the 1940s.  Originally constructed for black workers from the nearby factories, Lincoln Heights was a once prosperous community, but with a similar story the area would eventually declined from its original idea of a successful black owned community.

As stated above, the North Side is growing as many of the inner city neighborhoods of the Cincinnati ghetto are either being gentrified or are plagued with vacant housing, which is causing the black population to relocate further from the inner city.

2 The LAND: Inside the East Side of Cleveland