DROPS D&B BALLAD ‘THINKIN BOUT U’ VIA HIS NEW LABEL

Following on from the launch of his label Inja Music earlier this year with poignant single Not Broken, MC, producer and DJ Inja returns with D&B ballad Thinkin Bout U (produced by Disrupta) just in time for a rave packed Valentine’s weekend.

Releasing on the x4 Drum&BassArena Award winning MC’s newly launched label branded with his signature grin, Inja Music has provided Inja with fresh creative expression. With his messaging always being an integral feature of his work, the new venture has resulted in undeniable D&B anthems that simultaneously deliver significant messages that resonate across mental health, relationships, politics and more.

The new single also follows his label’s soft launch at the end of the last year with self-produced single Funktown Riddim (Who’s Got The Packet?), a politically charged project that called out the double standards of the UK government. Whilst Not Broken officially launched his Inja Music imprint, delivering an important message of self-love during the often mentally challenging month of January.

With over a decade of success on the D&B scene, Inja has honed a unique craft with unmatched lyricism, positive energy and a signature showmanship few can rival. His evolution over the years has seen him develop the This Is Inja performance at live shows, where he has perfected DJing, MCing, mixing and singing all at once.

Whilst a true talisman on the electronic music scene, Inja also uses his voice for meaningful matters elsewhere as an incredible writer and poet. Having supported causes like CALM with spoken word projects and Amnesty International on their Words That Burn project where he wrote a poem called She Just Wanna Dance, Inja speaks wherever he sees fit and his new label will allow him to continue to highlight important topics to a wider audience.

Returning with a slightly lighter message ahead of Valentine’s Day, Inja’s Thinkin Bout U is a soul-fuelled scorcher with a sultry theme for the D&B lovers. Paired with Inja’s playful vocals and Disrupta’s sun-kissed production, Thinkin Bout U is a destined summer favourite. 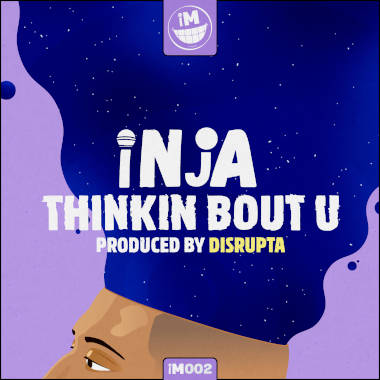