Boy Soda: Meet Australia’s Next Star in R&B and Hip-Hop

Get To Know the Rising Australian Star

Acclaimed Sydney-based artist, songwriter, producer and vocalist BOY SODA has just unveiled his highly anticipated debut EP ‘THE DISTANCE BETWEEN THINKING AND FEELING’. Since 2019 BOY SODA has been on the rise after being picked by Converse to travel to the United States, where he opened for Dominic Fike at the Converse x Camp Flog Gnaw brand event in Los Angeles.

Returning to Australia, the young songwriter, producer and vocalist was armed with more ambition and fire driving his creativity; resulting in a string of single releases throughout 2020 that would put him on the national Australian radar.

In just a short period of time, BOY SODA has been propelled onto national and international radars; his music is a breath of fresh air and stands as an exciting moment within the new movement of burgeoning Australian-bred hip hop and R&B. As a young artist who is always thinking forward about his next moves, the time is now to get on board. It’s SODASZN 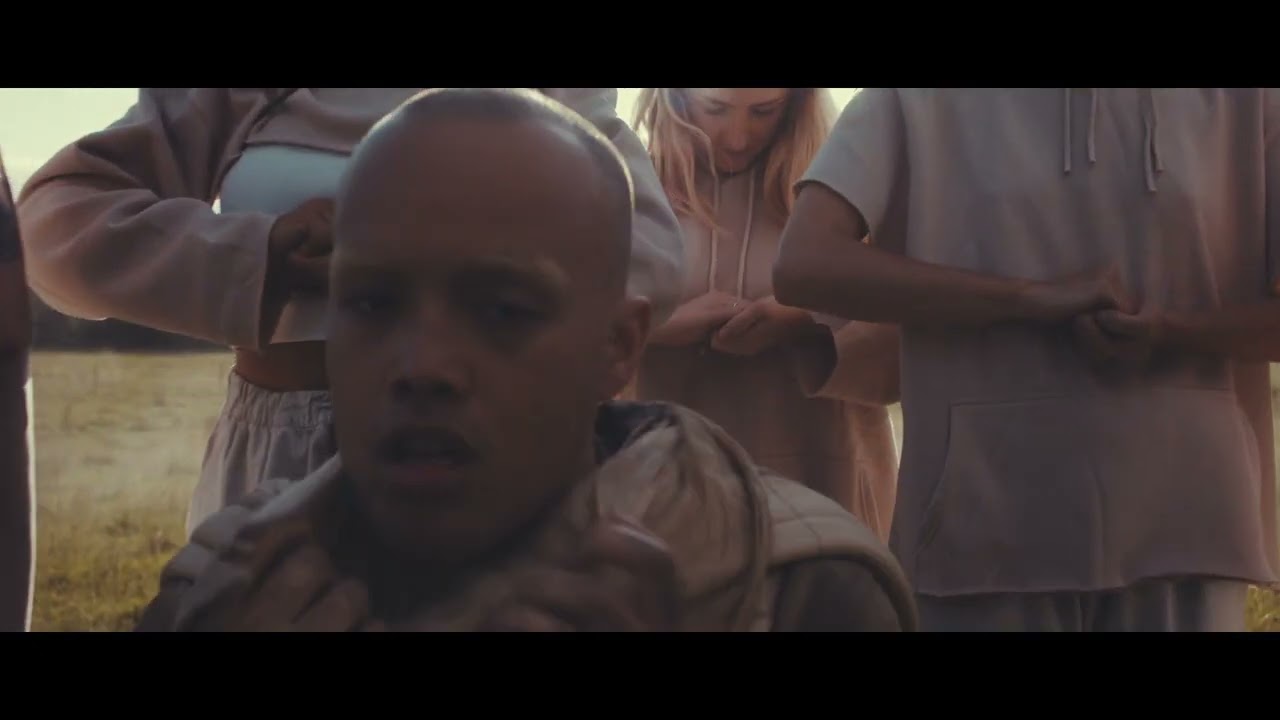 ‘THE DISTANCE BETWEEN THINKING AND FEELING’

Opening track “TWENTYOH5”, sets the tone for the EP, co-produced by lovemedo, the track examines the rebirth of self through an emotional rollercoaster of phases before moving “WELCOME TO THE GLOW UP”. Produced by Korky Buchek, “WELCOME TO THE GLOW UP” sees BOY SODA coming into his own as an artist, owning his unique blend of modern electronic R&B, all the while celebrating the process.

For BOY SODA, the track is his calling card to others, inviting them to join his journey, his “glow-up” if you will, and champion similar acts of self-love and recognition in their own lives. Teaming up key-collaborator and director with Bailey Watts, the track came along side an incredible video.

Rich with thumping 808s and undeniably catchy hooks, lead single from the project, “LOVEU2BITS” is BOY SODA at his most content. Co-produced by Hugh Lake and James Hamley, the single also came alongside an official video, directed once again by Bailey Watts and filmed over two days in Newcastle with the help of some local small businesses, including Susuru Ramen and Popolo Gelateria.

“THE DISTANCE BETWEEN THINKING AND FEELING’ is the first full look I’m giving people in my mind and my world. I think it’s very reflective of my relationship with self-love and self-awareness and how those effects everything else I do and say – a project of six conversations with myself about love and healing and celebration.” – BOY SODA

“RIDE” introduces another presence into the project, the love interest that helps to create the journey of love and love lost before the “the falling moment” on the EP, “LONELY”. Closing out the project is “BIG”, born from ideas and thoughts circulating BOY SODA’s head about purpose and looking back on the previous two tracks with introspection and perspective. The single comes alongside another incredible visual, featuring a dystopian ‘Dune-inspired’ world (including subtle prosthetic gills, off-world costume design and a planet in the sky).

“From track one (TWENTYOH5) to the closing song (BIG), I wanted to create this arch that started around an experience of pure emotions and concluded on a reflection of thought. I still drive the car my grandparents gave to me, I grew up in it, and it’s very fitting that it’s on the front cover because it’s a timestamp of how I think and feel right now. I hope this project curates long, late night drives and important conversations with yourself and the people around you. I hope it plays as the sun hits your face for the first time in the morning and again at 3am when your thoughts are loud.” – BOY SODA 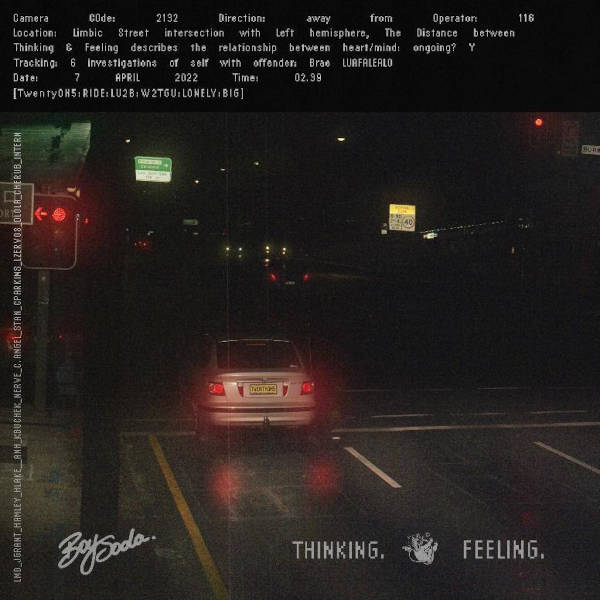 Stream and Buy: THE DISTANCE BETWEEN THINKING AND FEELING

Meet and Get To Know Boy Soda

KultureVulturez: Growing up did music or anything artistic or creative had a major role in life?

BOY SODA: My dad was in musicals growing up and would play the guitar around the house a lot. It definitely influenced my love of singing, some of it even coming from wanting to be like him! I’ve always loved writing stories and find a lot of freedom on a blank sheet of paper. I was very lucky to have parents who were extremely supportive and nurturing of the creative spheres that existed in my life and that has allowed me to protect my imagination and the inner child in the present.

KultureVulturez: How can you explain the steps you took in making the decision to pursue music?

BOY SODA: I’ve always known how much I love making music and for that reason alone it’s always been at the forefront of my ambitions. I began to learn production in high school and it really allowed to me to experiment and pull the curtain back on how a song is made. I just created it with the intention of getting better. and for the sake of creating and that inevitably landed me in a space where I’m surrounded now by people that see the same beauty and necessity in music. So it was never a decision per say. it just felt like it’s an inherent part of what I was put on this earth to do.

KultureVulturez: Break down your music, topics you touch on and how you separate yourself from the crowded industry?

BOY SODA: I try not to look left or right of me in the industry. I’m very inspired and feel alive amongst so many amazing artists but I’m focused on making music that is deeply true to me, which can only breed original expression. I’m very open about my mental health and vulnerable in the way I express my thoughts. I think I live in a space that’s very influenced by R&B and Hip-Hop but I feel like I exists across multiple genres depending on what and how I intend to communicate something. I want to create in every colour and sound and I’m really excited to reveal the layers of my mind as I construct and curate the world that is BOY SODA. 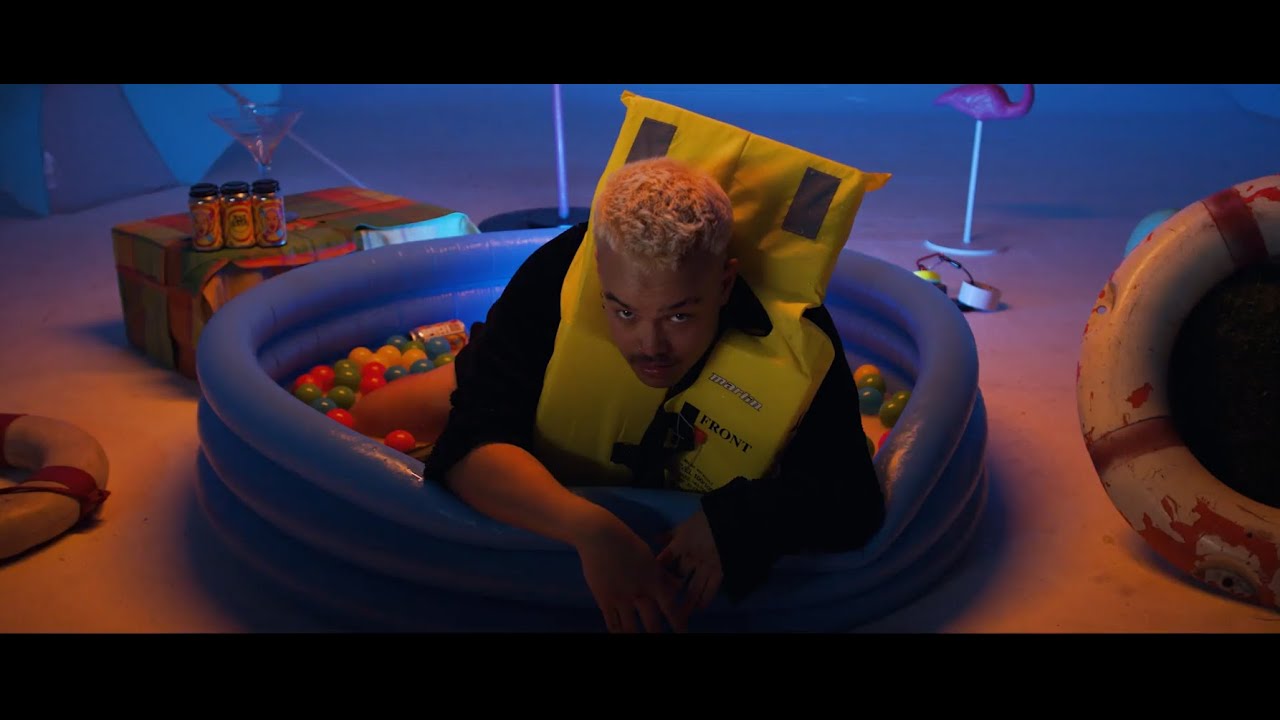 BOY SODA – WELCOME TO THE GLOW UP

KultureVulturez: What inspiration helped you develop your style?

BOY SODA: Honestly, at this point, it’s just about what makes me feel good! I pick outfits to feel confident, inspired and comfortable and I really love being able to curate my color palette and silhouette. In the same way, we like to curate our lives with music, it’s just as freeing to customize the way we’re perceived visually. I dress for myself and am very grateful to live a life where I can enjoy that luxury.

KultureVulturez: How did you come by the name BOY SODA?

BOY SODA: I was inspired in school by this neon sign at the back of a gas station that said ‘soda’ and I liked how that name felt with the music I was beginning to make. It only evolved into BOY SODA because Instagram wouldn’t let me have ‘soda’ by itself but it’s a happy accident because it feels perfect in hindsight.

KultureVulturez: What is the story behind your latest release “BIG”?

BOY SODA: It’s a conversation about perspective and purpose! I wanted to balance my thoughts of feeling like a spec in the universe, and also feeling overwhelmed with gratitude for the things that existed right in front of me. Things like friendships, where there is no obligation for two people to spend time and energy on each other, but at some point both decided to commit and invest in that way, is so special. It goes back to thoughts of giving and receiving love and that’s a common theme in BIG. Whether it’s love for self or another, I wanted to scream its importance from the rooftops, hence the lyric, ‘Use empathy with aggression” ️

KultureVulturez: What all do you have in store for your career that people should be on the lookout for?

BOY SODA: My debut EP ‘The Distance Between Thinking & Feeling’ is avail on April 7! Big is the final track and I think it’s really important for people to listen to the whole project because it puts the last 3 singles into perspective and gives them context! It’s a deep dive into the way I think and feel and although I’m always evolving, I’m so fucking proud to have this project as a timestamp for the man and artist I am today.