The Short Story of the Mobile Alabama Ghetto

Many people were born into the conflicts, depending on what neighborhood they grew up in, as the communities changed by the 1980s and the 1990s with the increase of street activity compared to previous years.

While some cities may have gangs and gang activity, even though in Mobile some people may be affiliated to national gangs like the Bloods or the Crips, mostly everybody is aligned with the specific Mobile Alabama hoods they were raised in.

There are various well known and reputable hoods like Crichton, Down the Bay, the Campground, Maysville, and Toulminville, but the main sections of the streets and urban communities of the Mobile Alabama ghetto are the city’s housing projects.

The actual city of Mobile had five main housing projects that consisted of Orange Grove, Roger Williams, R.V. Taylor, Birdsville, and the Baltimore projects, not including neighboring Prichard which was once the home of the Bessemer projects.

The city’s housing authority, the Mobile Housing Board, was founded during the late 1930s and has provided housing for thousands of Mobile’s residents since its beginning, even as its purpose and operations have changed.

*The above map does not indicate any Mobile Alabama gangs as gang activity is not as prevalent in the city of Mobile as other cities.

History within the Mobile Alabama Ghetto

Before the 1970s, Mobile had a segregated society with African-Americans only being allowed to live along Davis Avenue, in the Plateau and Happy Hills section, Down the Bay, and Trinity Gardens near Prichard, Alabama.

Along Davis Avenue, which has been changed and is now called Dr. Martin Luther King Jr. Avenue, are the two neighborhoods of the Campground and the Bottom, officially known as Fisher and Owens.

The Bottom and the Campground, which received its name from being a form campsite for black soldiers who fought in the Civil War, are two of the oldest neighborhoods in Mobile, dating back to the days before the Civil War as many homes were originally owned by slaves and freedmen.

Davis Avenue would later become the heart of Mobile’s black culture and black community, somewhat the Harlem of Alabama as the area once thrived with black owned businesses and entertainment.

While mostly all of Mobile’s original black communities were located on the North Side, or north of today’s Spring Hill Avenue, and within the Down the Bay neighborhood, an isolated community on the city’s South Side that sits between S. Broad and Interstate 10.

As the city desegregated and white flight led many to move into West Mobile during the 1970s, the neighborhoods on the South Side, south of Government Street, became predominantly African American, from Navco to DIP (Dauphin Island Pkwy.) to Maysville.

The oldest African American community in Mobile is a section that was once referred as AfricanTown, which later became the home to the two separate neighborhoods of Plateau and Happy Hills.

The community became established after slaves landed in the area fresh off the slave ships that traveled up the river, since Mobile was originally a slave port, and never left the area as they eventually built their own community.

While Mobile’s history includes being the birthplace of Mardi Gras, not New Orleans, the city has had a rich history in slavery whether it is the former cotton mills located in Crichton, the old slave homes in Mobile’s Midtown, or the communities that slaves created in areas like Happy Hills and Plateau’s Africatown.

While there have been street conflicts between the housing projects of the Mobile Alabama ghetto, which has caused violence that has led to numerous deaths and incarcerations, there has also been a war by the citizens of Mobile to keep their communities.

During the start of the 2000s, the city of Mobile began to demolish its housing projects, first starting with the two infamous and notorious housing complexes of Orange Grove and the Bessemer Projects of Prichard.

Orange Grove, which was Alabama’s largest housing project, has now become a shell of itself as only a small renovated section is left.  The rest of the former housing complex is an empty grass field with exception to the new Renaissance Gardens housing apartments.

The Josephine Allen housing projects of Happy Hills have been closed for years, while the Roger Williams housing project, also known as R Dub or Brazier Drive, has recently been demolished after years of massive vacancy and rundown conditions. 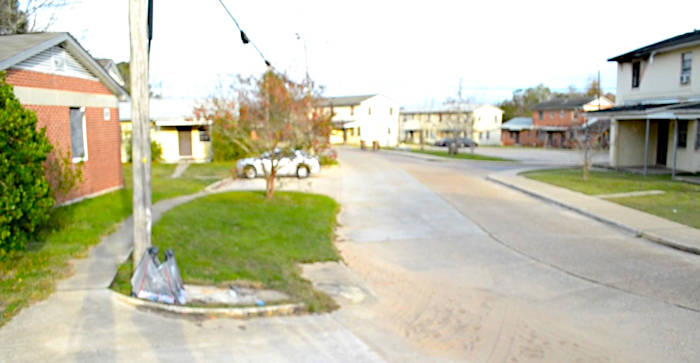 The former Roger Williams housing complex before its demolishing

Many have been relocated into other housing projects like RV Taylor, which has caused problems of its own due to neighborhood conflicts, but there have also been talks in demolishing both Birdsville (Thomas James Place projects) and RV Taylor.

Today’s housing authority is stricter with who can be a tenant within the city’s housing projects, restrictions include must be employed or a full-time student, no criminal background, good credit, and a good standing with recent landlords.

Obviously, gentrification has taken over key neighborhoods of the Mobile Alabama ghetto as the fate of the housing projects has become known but the future of communities outside the housing complexes are not known, especially where areas like the Campground or Down the Bay have a close location to Mobile’s downtown.

4 The Old Atlanta: How the City Changed…