A trip into the small town of Aliquippa, just 30 minutes north of Pittsburgh, is a place that has been historically known for the community’s football programs, but linking up with OTL YoungReese shows there is more to the small community than just sports.

A young up and coming artist that has all the talent and local creditability to be able to become the next rapper out of Pennsylvania and the first person to make it out of Aliquippa on a major scale that is not an athlete.

The bulk of the interview was done as we walked around in the heart of Aliquippa’s Linmar Terrace as OTL YoungReese seemed to know just about every who was outside in the complex. Following the walkthrough of Linmar Terrace, we took a drive through some of YoungReese’s old stomping grounds, from the Plan Twelve neighborhood to the Valley Terrace complex.

With the majority of the people who make it out of Aliquippa being football players, like Ty Law, Darrelle Revis, Tony Dorsett and numerous others, OTL YoungReese plans to change that. Despite only a couple of songs on display, Ain’t Playin’ Around and F*** The Hill, with the current atmosphere of rap music OTL YoungReese has all the right ingredients to make history in Aliquippa.

We on Linmar, this is where all this shit be happening at, OTL (Only The L). We in Aliquippa and this is Linmar Terrace.  A lot of people don’t know, but Aliquippa is small as hell.  It’s real small, it’s miracle to make it out of here.

The only way you are going to make it out is in sports.  This rap shit, it’s only a couple n***** be doing it and a couple have made a way with it, but we the only ones really doing it right now that are trying to make it.

The Quip (Aliquippa), this shit is small. Everybody family, you are not going to meet too many people that are not related.  It be people who you don’t fuck with and you see them like twenty times, because it’s so small.  All the football players they are the ones that are making it out, so we are just trying to pave a way for music.

“But this is what made me, Only the L (Linmar Terrace)”, says OTL YoungReese as he shows different locations within the complex. “This why I’m going so hard with this music shit, I’m trying to get somewhere”. 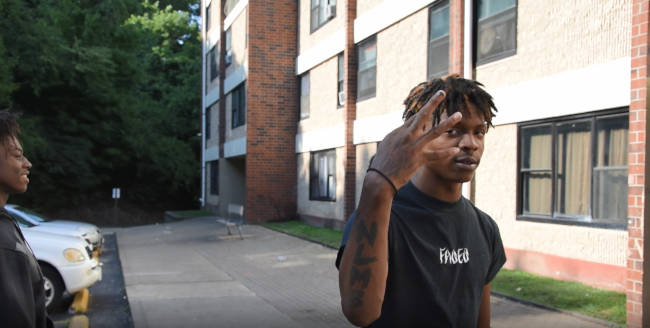 We took a short break during the interview and stopped in the Valley Terrace complex.

How did you start rapping?

It’s a funny ass story. I think I was 12, I heard that “Bobby Bitch” by Bobby Shmurda.  In school, my teacher would be on me about certain shit, so I made a little song and dissed my teacher.  I did that and got kicked out of school for about a week, but the song was booming. I had the whole school listening to my shit.  After that, I’m like maybe I can do this shit for real.

How things be Going Since You Started rapping?

This rap shit has brought a whole lot to me, girls, money, a little bit of clout.  I been have had a clout, I been poppin’ and lit in my city, everybody knows my name, but when I started rapping I received a whole different bracket of love.

We picked up this rap shit to make another way, so we can get out of here.  We can’t do the same shit for life, and we talented with our words, so why not put it to work.  I have been trying to tell a couple of my people that, we really have to do this shit.  If we want to make it somewhere then we have to do this shit, I’m constantly telling my people that.  If we don’t do it then someone else is.

When did You start to take it seriously?

When I got out of jail, last time, is when I took rapping serious.  I was thinking that I have to do something, I can’t keep on getting booked.  I got out December 2019, after I got out they had me on house arrest for a month, but in January is when I started to take this seriously.  So, I have been taking it seriously for some months and shit has been going and we focus on millions.

I’m young, I have a kid, I have shit I have to do.  That’s why soon as I hoped out of jail, I’m like we have to do this and take it serious.  Ever since I came home I have just been keep going, especially I have someone I have to live for now, so I have to change how I am moving and change what I am doing.

Watch the full interview and short (unofficial) documentary with OTL YoungReese below.