While the 80s made way for over-the-top styles, 90s fashion for women had a way of making everything a bit more commercial while also still contributing some style staples that we wear today. All in all, it is well known for its contribution to fashion trends and is a time where women continued to slay the fashion game. From the pop looks sported by the Spice girls to Cher’s looks in Clueless to Janet Jackson showing off looks we use to inspire us today in the 1993 film Poetic Justice.

Some styles were easily carried over from the trends of the 80s such as high-waisted bottoms and jeans. While the 80s focused more on acid-washed denim, the 90s remixed it and settled for more faded, light-washed denim. While they were easily paired with casual t-shirts and tailored blazers, a popular styling of high-waisted denim was popularized by Janet Jackson’s character in the 1993 film Poetic Justice. In the film, one of her most popular outfits was the simple combination of a black, long-sleeved turtleneck and high-waisted light wash denim jeans. While this outfit may seem simple, it was a staple look for any and all 90s it-girl’s and could be seen on others like Cindy Crawford and Halle Berry.

As well as this look, effortless, spaghetti-strapped slip dresses were in style, and icons such as Naomi Campbell and Tyra Banks were making matching co-ord sets a trend both on and off the runway. 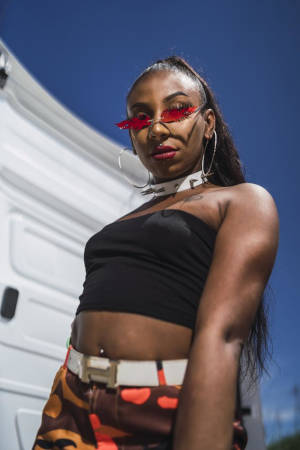 They look cute, sweet and they’re a part of history. Yes, crop tops made an excellent go-to choice for casual wear for 90s fashion for women. It was quite common to wear one with a plaid shirt to go on the top. These shirts didn’t have to be bold or flashy, even solid tops in neutral colors were quite in the scene!

And that’s not all, women rocked this outfit with a pair of jeans, mini skirt, and shorts too. Black, white, dark blue – the color of denim was beyond matter. And when paired with accessories, it was the perfect wardrobe to spice up any day! 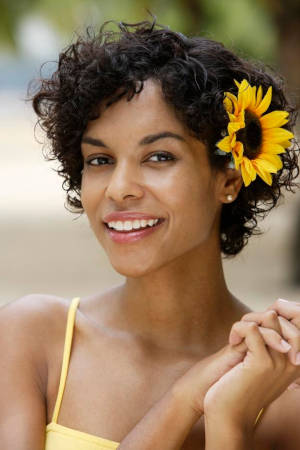 Starting with the timeless elegance of the 90s, the spaghetti straps were the cherry on top, that special thing that was a must-have for all the glamorous looks we saw on the red-carpet moments.

From tank tops to slip dresses the spaghetti strap fever was heavily promoted by some of television’s and film’s top actresses, along with many supermodels from that time being head over heels in love with this trend, especially when it was in combination with the timeless, little slip dress from the 90s!

Spaghetti straps tank top over white t-shirt was a trend that originated from the 90s, and nowadays is a must-have for all the e-girls! We now see the spaghetti stripes trend return in combination with even lusher textures and prints.

And what goes best with the spaghetti straps? Of course, the equally glamorous slip dress from the 90s! The queen of glam and synonym of 90s fashion for women, the slip dress was part of the underwear-as-outerwear trend; mostly made from polyester satins, as well as charmeuse, and chiffon, frequently trimmed with lace, this trend is nowadays returning in full glory. 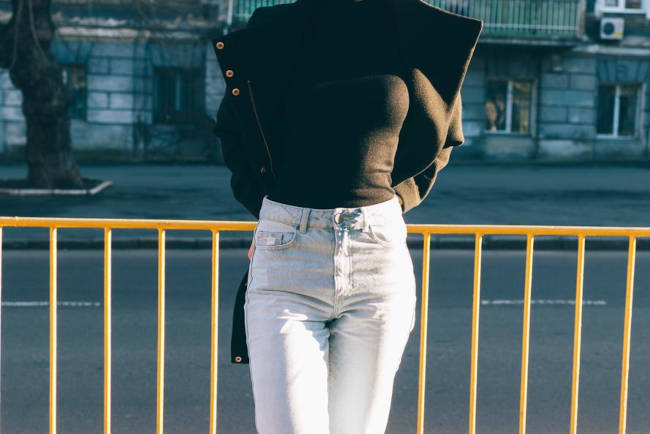 The popularization of the high-waisted denim Levi’s (and we are talking about 501 of course) through the 1990s top movie icons making them look effortlessly sexy, urban, and modern. Combined with leather jackets, accessories, bandanas, and cute tops and tanks, this piece was a basic, must-have piece for everyone back in the day! 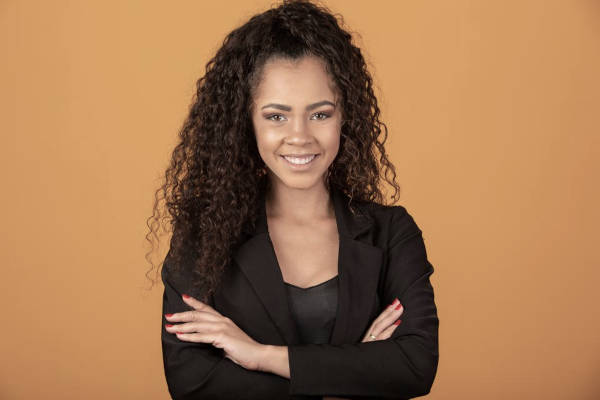 What made power suits of the 90s so different? They were block-colored, most of them made of tones that reflected gems or jewels. Neutral colors have always been an all-time classic for such a look. But bold tones back then set you apart from the crowd – the 90s fashion for women was all about creativity and individualism!

So, imagine having richly colored blazers as one of the most powerful outfits in your wardrobe. And imagine how the power would become double by adding miniskirts, handbags, bowler’s hats, and heels. Combine all the above and you would get the ultimate 90s women chic style. This style was an all-time diva look which we can see even today. 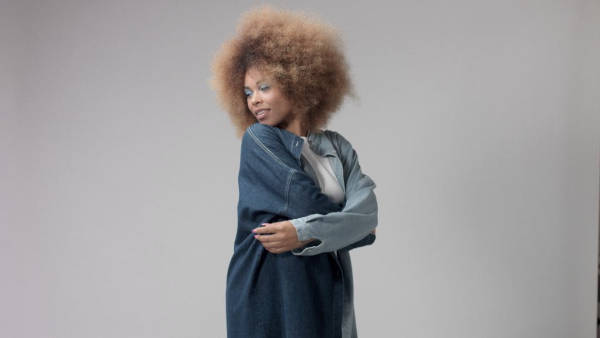 Baggy denim ruled 90s women’s fashion. A simple fitted t-shirt was the best match to go with loose denim jeans. But again, nobody was afraid to add a bit of color and pattern. So, checker shirts and tops were also in the women’s fashion scene of the 1990s.

But there was something that won over all other styles. And that was the overall look created with the help of baggy denim jeans. Get your hands on faded baggy denim jeans, for example, and pair them with a shirt of the same color. For sure, this jumpsuit-like style would often take the spotlight in 90s fashion for women! It was casual wear topped with simplicity and elegance.

Another trend set by a number of famous actresses and supermodels from the 90s, the denim jackets with patches and embroidery were a stable, must-have capsule wardrobe piece of the 1990s! This Americanized trend got us all into stitching, ironing, and embroiling patches as an expression of our personalities. You would see many versions, from favorite quotes to embroiled roses; the best part was, even if your favorite denim jacket or pants ripped, with patches you had a way to fix them, add life, and wear them for some time! So neat! 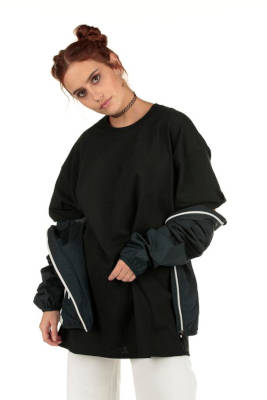 What was Friends for the spaghetti straps, and Clueless for the matching plaid sets, was the Fresh Prince of Bel-Air and other sitcoms shows from the 90s for the tracksuits and the big comfy t-shirts. Their popularity raised and their look even evolved; at the beginning of the decade, their emphasis was on being sporty, comfy, oversized, and colorful, but at the end, they turned into velvety tracksuits for women oftentimes enriched with rhinestones and words on the back.

Sounds quite heavy, but in the 1990s, women nailed large tracksuits as a fashion statement. And it turned into mainstream fashion, with a special thanks to hip-hop dominating the pop culture. Even to this date, you could picture a 1990s hip-hopper wearing it. 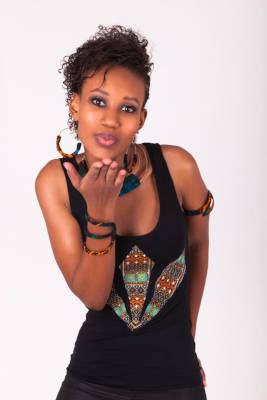 What comes to your mind by African patterns? Well on the traditional side, a few elephants might be the first thing. But of course, the designs go beyond that. African patterns are known to have beautiful overlapping of dots and lines. These could be twisted into a repetitive design or even a spontaneous one.

From shirts to dresses, these patterns could be found on anything at that time. Some clothing items looked better than others. For instance, waistcoats were a huge trend. And there were a variety of other uppers to make things more interesting.

Colorful tees and sweaters looked great, and so did tie-and-dye shirts. The dazzling colors along with patterns were the ultimate win for black American women to rock their African backgrounds!

The must-have holy trinity in every girl’s backpack back in the day! The 90s fashion for women were famous for their timeless accessories and if nowadays you use claw clips solely at home, back in the day they were trendy and came in all shapes, forms, colors, and sizes. Colorful extensions and braids added to the hair with tiny clips became even more popular at the end of the decade. Scrunchies made from every material you can think of were also part of the necessary items in girls’ backpacks, and besides being used on hair, they were oftentimes used as bracelets! The practicality they offer!

As you may see, many of today’s modern pieces that feel relatively fresh, exciting, and new actually have originated and are part of the reoccurring 1990s’ trend fever that has taken us in the last decade. Which ones are your favorite? Which ones will become stables of your capsule wardrobe? Let us know in the comments down below! 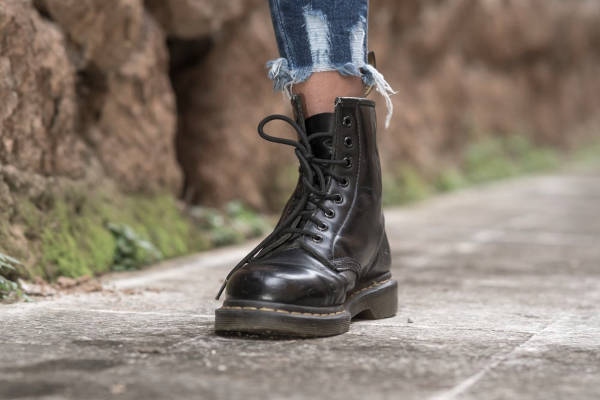 Making a big splash in the last years, little do you know are the good old combat boots from the 1990s! Back then, Dr. Martens were THE FOOTWEAR trend, adding edginess and grunge to every outfit. Even the cute floral dress would instantly become edgier when paired with them! Combat boots, big bulky and stunning have taken over the 1990s like a storm, and if you look at the recent years, you will see this trend emerging and returning in its full glory.

The 1990s were famous for being effortlessly stylish, and this was reflected in the makeup trends as well. The entire makeup was usually thinly layered, simple, and minimal. The 90s’ makeup was at most minimal, with using only the basics of makeup, Thin eyebrows, eyeshadows that were pastel, the matte skin was in, and the lips were the ones being played with the most, going from the brick lip to over lined or the famous red/baby pink lip.

Eyebrows were thinner as we mentioned, but if you were a diva or someone who liked the spotlight, all over shimmer was the go-to trend you would have followed; and that included sparkles all over, including eyebrows. Eyelids, on the cheeks, even hairline! It was also popular to glue pearls, sparkles, and interesting heart-shaped decorations on your face for that extra look! The makeup bloggers nowadays are having a field day with the 90s trends, trying to revive their glory.

Stepping into the edgy, grunge territory, the first thing is first – the versatility and duality of the bandanas have won the hearts of millions in the 90s, and now it is making a big, flashy comeback! This multi-purpose accessory can go everywhere, around your neck, hair, hand, like t-shirt, handbag accessories, around your waist – it truly was the accessory item of the 90s!