Cleveland Hoods to Hoods: Full Tour of the Cleveland Ghetto

Hood to Hood Story of the Cleveland Ghetto

The Land, made popular by LeBron James’ run as the star of the Cleveland Cavaliers and the legendary hip-hop group of Bone Thugs N Harmony, has its heart based in the East Side, a side that has includes numerous Cleveland hoods.  Broken into four separate sections, Cleveland East Side consists of Down the Way, Out the Way, In the Way, and Up the Way,

DTW (Down The Way): The home of the Cleveland projects

Ranging from Cedar and 30th, in the neighborhood officially known as Central and home to the majority of the Cleveland projects, to Woodland and Bundy Drive are the main areas that make up the Down The Way community.

Once known as Dirty 30, the Cedar Estates is one of the last original Cleveland projects, while being centered around 30th and Cedar.

In probably Ohio’s most active community, meaning much street and illicit activity occurs within the boundaries of the neighborhood, there has been everything from decades of conflicts and neighborhood wars, like Case Court against Longwood, to old school reputable Cleveland gangs of the King Kennedy Outlaws and the Brick City Outlaws.

With neighborhoods like the Cedar Estates (known strictly as 30th), Unwin, Cedar and 33rd, Longwood (rebuilt into the Arbor Pointe complex, but still referred as Longwood), Case Court and the Compound of the large Outhwaite complex, and Bundy Drive’s Delaney Village, as well the former high rise of King Kennedy, there should be no surprise of the amount of activity within the area.

The Case Court section of the Outwaite housing complex. One of the first Cleveland projects over the years became one of the most reputable with two separate section, Case Court and the Compound.

Originally, the Central neighborhood was home to various European immigrants that resided around the major corridors in the area, whether 30th Street, Woodland Avenue, or later 55th Street.

The community would later transform into a predominantly African American neighborhood, starting around the 1940s as the former immigrants and descendants of a variety of European groups fled the area for other East Side communities, ones that were closer to the suburbs or within the actual suburbs of Cleveland.

As black southerners from places like Alabama relocated to Ohio’s most northern city, many moved into the already existing black community of the Central neighborhood, which at the time was between E. 30th and E. 55th around Central Avenue.

Beginning in the 1930s, the city created the Cuyahoga Metropolitan Housing Authority which would later build the first Cleveland projects, the Outhwaite Homes and Cedar Estates in the Central neighborhood, as well Lakeview Terrace on the West Side around W. 25th and Detroit.

Following Outhwaite and the Cedar Estates, the Central neighborhood, or Down The Way, became home to the Longwood, Friendly Inn (Unwin), King Kennedy, and later Delaney Village housing complexes, which made it the most populated area in the city of Cleveland.

Across 40th Street from Outhwaite is the newly rebuilt Longwood housing complex, now known as Arbor Pointe. Built in the 1950s, as part of urban renewal, the reputation of this Cleveland projects has lasted for decades, even after the complex was rebuilt.

Today, gentrification is slowly creeping into the Cleveland East Side neighborhoods.  In Central, housing projects like Outhwaite and the original section of Cedar Estates are still up, but with the recent rebuild of the housing projects around 30th and Central into the Sankofa Village apartments only time will tell what the future of the Down The Way community will be.

With the hope that Ohio and Cleveland would bring African American families better living conditions than the south the black population of Cleveland constantly increased, which in turn helped establish new communities in other East Side neighborhoods outside of Central. 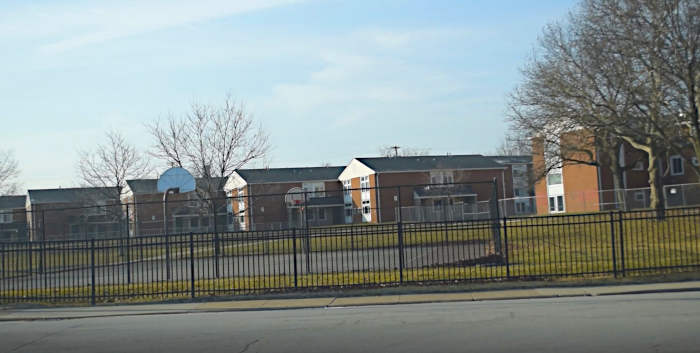 Rainbow Terrace, the remaining section of Garden Valley after the complex was rebuilt.

The smallest section of the East Side is the In The Way community.  An area of two notorious neighborhoods of the Garden Valley and the Morris Black Cleveland projects as well Cleveland hoods around Cedar Avenue, from 71st to 105th, Quincy Avenue, from 79th to 93rd, Broadway, and Fleet Avenue.

Fairfax, which expands from 71st to 105th between Carnegie and Woodland, is an extension to the Central neighborhood as black families have been in the area since the 1940s, even became the former home to the late soul singer of Bobby Womack as his family were one of the first to reside in the community, along Quincy Avenue.

Cedar Avenue, as well Quincy Avenue, within the Fairfax community has changed dramatically. With the close location to the Cleveland Clinic, the expansion of the hospital has wiped dozens of homes and businesses.

With Cedar’s and Quincy’s close location to the hospital of Cleveland Clinic the area is slowly disappearing within the city’s African American population as the expansion and constant construction of nearby Cleveland Clinic is pushing the people and businesses out of their community.

Garden Valley, which was the former home to one of the most notorious Cleveland gangs, the Valley Brick Outlaws, was one of the first housing projects in Cleveland to be torn down during the 2010s as the community has been newly rebuilt leaving only the smaller complex of Rainbow Terrace.

Up The Way, which can also be referred as Uptown or the South Side, is a well-known section of the city with people living along Kinsman, Buckeye, Miles, or Harvard as many families have had generations of relatives living “Up The Way”, especially in the Mt. Pleasant community. 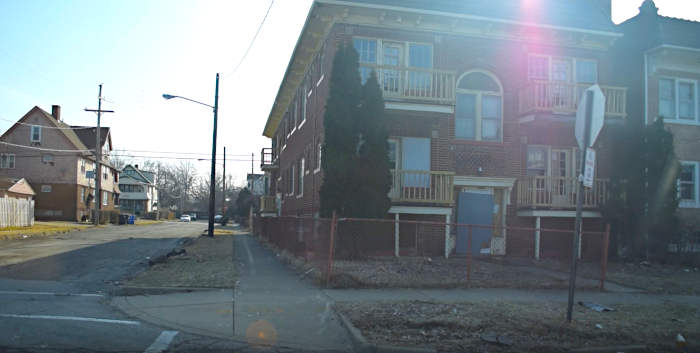 Along the route of Cleveland’s RTA’s number 14 bus is a view of the South Side’s most reputable area, Kinsman, with Cleveland hoods like Kinsman 20s, Kinsman 30s and the Kinsman 40s, which represents the separate sections of Kinsman between 116th and 149th of the Cleveland ghetto.

Another large area of the South Side is 116th, home to John Adams High School this section is probably Up The Way’s most populated area with blocks from Benham to Lenacrave, an area that has constantly made the local media.

With Miles Avenue, Buckeye Road, 93rd, and the multiple sections of Harvard, like the Deli and J Park, Up The Way is the East Side’s largest section by expanding from 93rd street to 190th, and continuing into the Warrensville Heights and Maple Heights communities. 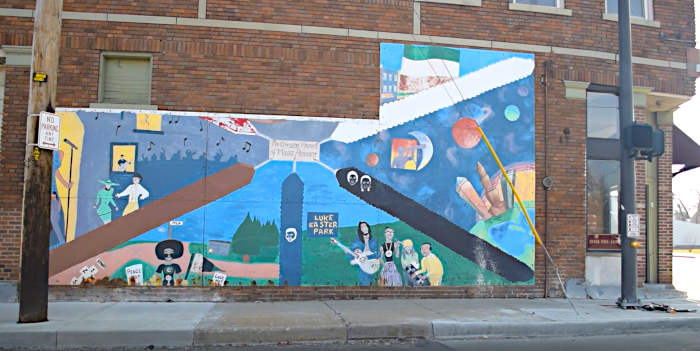 There have always been small black sections on the South Side, like the area around 79th and Kinsman, specific sections of Mt. Pleasant, and in an old area once known as Miles Heights, which was located near Miles and South Lee.

OTW (Out the way)

Out The Way, located in Northeast Cleveland, is large section of the city that has became well known for the various Cleveland hoods of Collinwood, Hough, which includes Wade Park, Hough Harlem and Hough Heights, or the 105th and St. Clair area of Glenville, nicknamed the 10-5 and the Wasteland while also being the former home of Bone Thugs N Harmony.

Rewinding back to the 1950s, as the black community of Cleveland was expanding during the 1950s and 1960s, African-Americans eventually began to make their way and reside in the Northeast Side communities of Hough and Glenville. 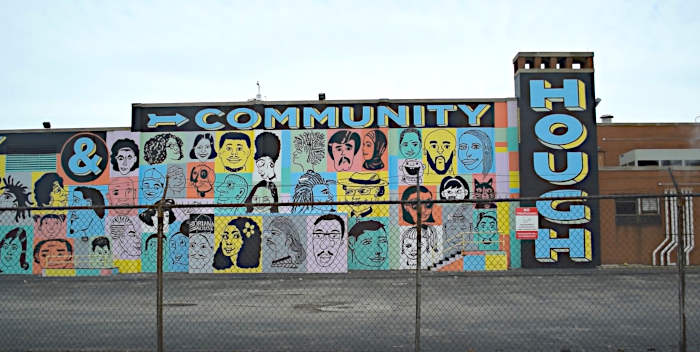 During a time of racial tension these two neighborhoods would later gain national attention during the 1960s for the “Glenville Shootout” and the “Hough Riots” as people began revolting against their mistreatment within the local black community.

Over the years, especially after racial tension reach its peak, the entire Out The Way community of Cleveland became predominantly African American, expanding from 55th to 152nd along either St. Clair or Superior.

Currently, the community is a shell of itself as dilapidated housing and vacant properties plague many of the neighborhoods that sit along St. Clair and Superior, from the Hough and St Clair-Superior neighborhoods to the South Collinwood area around 152nd.

The Glenville neighborhood along 105th.

With less and less housing as vacant properties of the Cleveland ghetto on the city’s East Side are widespread, the East Side is slowly losing its population as years of decline have led the black community to grow into the suburbs of Cuyahoga County in places like Cleveland Heights or South Euclid.